Every object or earth body emits energy by radiation. We can take as an example in a house the walls, furnitures, inhbitants, pets …
This energy is emitted in the form of very long infrared waves. This ability to emit by radiation is called emissivity. The more an object has high emissivity, the more heat escapes, especially at night and in winter. The value of emissivity is between 0 and 1, the maximum value corresponding to the maximum theoretical radiant energy for a given temperature.

The interest of aluminium?

Interest of low-e films in building?

To avoid overheating inside a building in summer or a sensation of cold in winter despite heating inside, a thermal insulation mattress consisting (among other things) of metallised plastic film and protected by a varnish which does not disturb the low emissivity of the aluminised layer, this film will make the building more comfortable in all seasons.

It is possible to combine two functions: 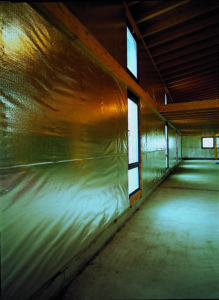 The installation of a thermo-reflecting membrane makes it possible to increase the energy efficiency by reflecting the radiant heat during the summer and by reducing convective heat losses during the winter, while allowing a good evaporation of the steam water. The membrane with a breathable metallic surface, can be used under a roof screen and will allow for a better thermal comfort of the building.

To conclude: a well-insulated building with a low-e membrane underneath and a water vapor permeable membrane will ensure excellent comfort for the inhabitants.